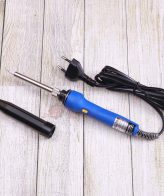 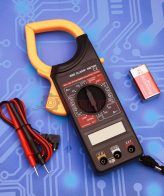 A multimeter with built-in clamp.

A clamp meter measures the vector sum of the currents flowing in all the conductors passing through the probe, which depends on the phase relationship of the currents.

A relatively recent development is a multi-conductor clamp meter with several sensor coils around the jaws of the clamp. This could be clamped around standard two- or three-conductor single-phase cables to provide a readout of the current flowing through the load, with no need to separate the conductors.

The reading produced by a conductor carrying a very low current can be increased by winding the conductor around the clamp several times; the meter reading divided by the number of turns is the current, with some loss of accuracy due to inductive effects.

Clamp meters are used by electricians, sometimes with the clamp incorporated into a general purpose multimeter.

Less-expensive clamp meters use a rectifier circuit which actually reads mean current, but is calibrated to display the RMS current corresponding to the measured mean, giving a correct RMS reading only if the current is a sine wave. For other waveforms readings will be incorrect; when these simpler meters are used with non-sinusoidal loads such as the ballasts used with fluorescent lamps or high-intensity discharge lamps or most modern computer and electronic equipment, readings can be quite inaccurate.

Typical hand-held Hall effect units can read currents as low as 200 mA, and units that can read down to 1 mA are available.

This type of ammeter can measure both AC and DC currents and provides a true RMS current measurement of non-sinusoidal or distorted AC waveforms.Several jaw sizes are available for clamping around large conductors and bus bars up to 4 1⁄2 inches (110 mm) wide.As the illustration shows, the scale is very non-linear and unsuitable for measuring low currents, with currents of less than half the full-scale deflection crammed into a short section of the dial.

ESC Connection Board Distribution Board

ESC Connection Board Distribution Board